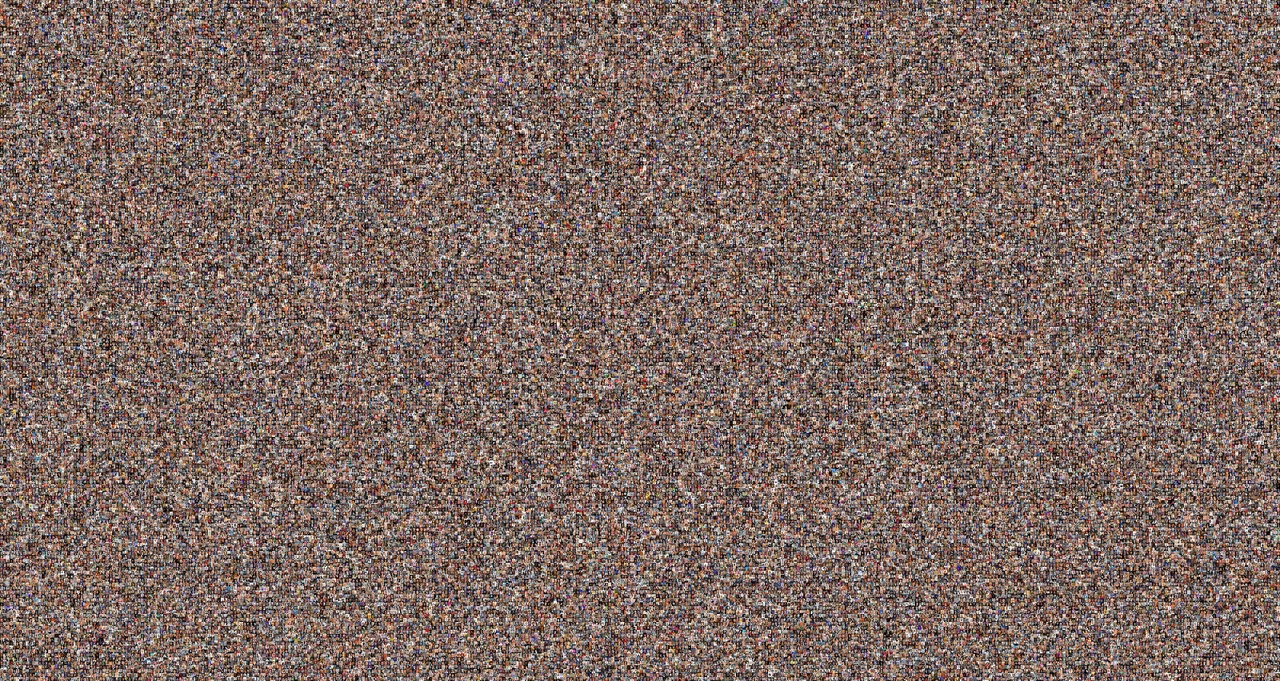 Example images from the MS-Celeb-1M dataset.

Microsoft Celeb (MS-Celeb-1M) is a dataset of 10 million face images harvested from the Internet for the purpose of developing face recognition technologies.

According to Microsoft Research, who created and published the dataset in 2016, MS Celeb is the largest publicly available face recognition dataset in the world, containing over 10 million images of nearly 100,000 individuals. Microsoft's goal in building this dataset was to distribute an initial training dataset of 100,000 individuals' biometric data to accelerate research into recognizing a larger target list of one million people "using all the possibly collected face images of this individual on the web as training data".[^msceleb_orig]

While the majority of people in this dataset are American and British actors, the exploitative use of the term "celebrity" extends far beyond Hollywood. Many of the names in the MS Celeb face recognition dataset are merely people who must maintain an online presence for their professional lives: journalists, artists, musicians, activists, policy makers, writers, and academics. Many people in the target list are even vocal critics of the very technology Microsoft is using their name and biometric information to build. It includes digital rights activists like Jillian York; artists critical of surveillance including Trevor Paglen, Jill Magid, and Aram Bartholl; Intercept founders Laura Poitras, Jeremy Scahill, and Glenn Greenwald; Data and Society founder danah boyd; Shoshana Zuboff, author of Surveillance Capitalism; and even Julie Brill, the former FTC commissioner responsible for protecting consumer privacy.

Update May 2019: In response to this report and an investigation by the Financial Times, Microsoft has terminated their MS-Celeb website msceleb.org.

Microsoft Research distributed two main digital assets: a dataset of approximately 10,000,000 images of 100,000 individuals and a target list of exactly 1 million names. The 900,000 names without images are the target list, which is used to gather more images for each subject.

For example in a research project authored by researchers from SenseTime's Joint Lab at the Chinese University of Hong Kong called "Consensus-Driven Propagation in Massive Unlabeled Data for Face Recognition", approximately 7 million images from an additional 285,000 subjects were added to their dataset. The images were obtained by crawling the internet using the MS Celeb target list as search queries.

Below is a selection of 24 names from both the target list and image list curated to illustrate Microsoft's expansive and exploitative practice of scraping the Internet for biometric training data for "celebrities". Names with a number indicate how many images were distributed by Microsoft. Since publishing this analysis, Microsoft has quietly taken down their msceleb.org website but a cleaned list of 94,682 identities used in the dataset is still available on GitHub from https://github.com/PINTOFSTU/C-MS-Celeb, which references another NUDT affiliated project. IDs in the format "m.abc123" and can be accessed through Google's Knowledge Graph as "/m/abc123" to obtain subject names and descriptions.

NB: names without a number indicate that Microsoft only distributed your name and encouraged researchers to download your face images to build a biometric profile. Images with a number indicate that Microsoft definitely included your faces images in their dataset. If images were not included by Microsoft it's more likely than not that your face was used for MS-Celeb-1M related challenges by organizations including NUDT, Megvii, SenseTime, IBM, Hitachi, and others.

After the MS Celeb dataset was first introduced in 2016, researchers affiliated with Microsoft Asia worked with researchers affiliated with China's National University of Defense Technology (NUDT) (controlled by China's Central Military Commission) and used the MS Celeb images for their research paper on using "Faces as Lighting Probes via Unsupervised Deep Highlight Extraction" with potential applications in 3D face recognition.

In an April 10, 2019 article published by Financial Times based on data surfaced during this investigation, Samm Sacks (a senior fellow at the New America think tank) commented that this research raised "red flags because of the nature of the technology, the author's affiliations, combined with what we know about how this technology is being deployed in China right now". Adding, that "the [Chinese] government is using these technologies to build surveillance systems and to detain minorities [in Xinjiang]". 2

Four more papers published by SenseTime that also use the MS Celeb dataset raise similar flags. SenseTime is a computer vision surveillance company that until April 2019 provided surveillance to Chinese authorities to monitor and track Uighur Muslims in Xinjiang province, and had been flagged numerous times as having potential links to human rights violations.

One of the 4 SenseTime papers, "Exploring Disentangled Feature Representation Beyond Face Identification", shows how SenseTime was developing automated face analysis technology to infer race, narrow eyes, nose size, and chin size, all of which could be used to target vulnerable ethnic groups based on their facial appearances, and using the MS Celeb dataset to build their technology.

Earlier in 2019, Microsoft President and Chief Legal Officer Brad Smith called for the governmental regulation of face recognition, citing the potential for misuse, a rare admission that Microsoft's surveillance-driven business model had lost its bearing. More recently Smith also announced that Microsoft would seemingly take a stand against such potential misuse, and had decided to not sell face recognition to an unnamed United States agency, citing a lack of accuracy. In effect, Microsoft's face recognition software was not suitable to be used on minorities because it was trained mostly on white male faces.

What the decision to block the sale announces is not so much that Microsoft had upgraded their ethics policy, but that Microsoft publicly acknowledged it can't sell a data-driven product without data. In other words, Microsoft can't sell face recognition if they don't have enough face training data to build it.

Until now, that data has been freely harvested from the Internet and packaged in training sets like MS Celeb, which are overwhelmingly white and male. Without balanced data, facial recognition contains blind spots. But without the large-scale datasets like MS Celeb, the powerful yet inaccurate facial recognition services like Microsoft Azure Cognitive would be even less usable. 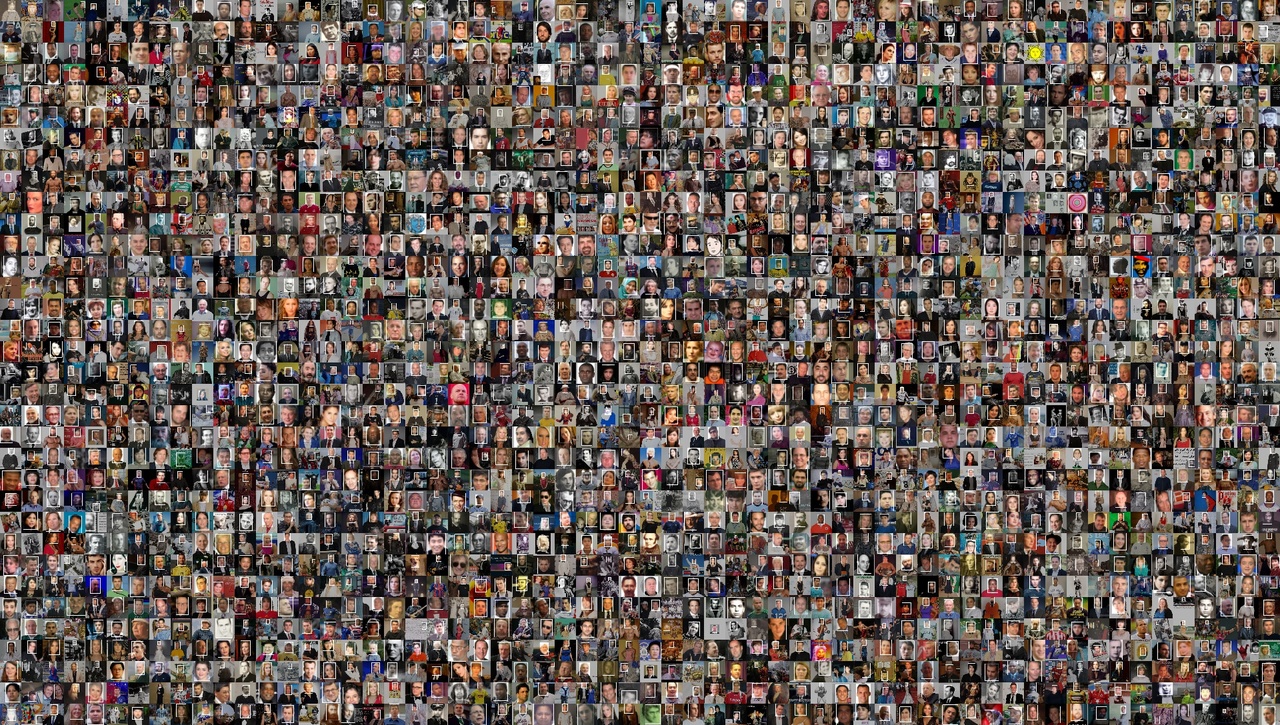 A visualization of 2,000 of the 100,000 identities included in the MS-Celeb-1M dataset distributed by Microsoft Research. License: Open Data Commons Public Domain Dedication (PDDL)

Microsoft didn't only create MS Celeb for other researchers to use, they also used it internally. In a publicly available 2017 Microsoft Research project called "One-shot Face Recognition by Promoting Underrepresented Classes," Microsoft used the MS Celeb face dataset to build their algorithms and advertise the results. Interestingly, Microsoft's corporate version of the paper does not mention they used the MS Celeb datset, but the open-access version published on arxiv.org does. It states that Microsoft analyzed their algorithms "on the MS-Celeb-1M low-shot learning benchmark task" 5,

Typically researchers will phrase this differently and say that they only use a dataset to validate their algorithm. But validation data can't be easily separated from the training process. To develop a neural network model, image training datasets are split into three parts: train, test, and validation. Training data is used to fit a model, and the validation and test data are used to provide feedback about the hyperparameters, biases, and outputs. In reality, test and validation data steers and influences the final results of neural networks.

Despite the recent termination of the msceleb.org website, the dataset still exists in several repositories on GitHub, the hard drives of countless researchers, and will likely continue to be used in research projects around the world.

For example, on October 28, 2019, the MS Celeb dataset will be used for a new competition called "Lightweight Face Recognition Challenge & Workshop" where the best face recognition entries will be awarded $5,000 from Huawei and $3,000 from DeepGlint. The competition is part of the ICCV 2019 conference. This time the challenge is no longer being organized by Microsoft, who created the dataset, but instead by Imperial College London (UK) and InsightFace (CN). The organizers provide a 25GB download of cropped faces from MS Celeb for anyone to download (in .rec format).

And in June, shortly after posting about the disappearance of the MS Celeb dataset, it reemerged on Academic Torrents. As of June 10, the MS Celeb dataset files have been redistributed in at least 9 countries and downloaded 44 times without any restrictions. The files were seeded and are mostly distributed by an AI company based in China called Hyper.ai, which states that it redistributes MS Celeb and other datasets for "teachers and students of service industry-related practitioners and research institutes." 6

Earlier in 2019 images from the MS Celeb were also repackaged into another face dataset called Racial Faces in the Wild (RFW). To create it, the RFW authors uploaded face images from the MS Celeb dataset to the Face++ API and used the inferred racial scores to segregate people into four subsets: Caucasian, Asian, Indian, and African each with 3,000 subjects. That dataset then appeared in a subsequent research project from researchers affiliated with IIIT-Delhi and IBM TJ Watson called Deep Learning for Face Recognition: Pride or Prejudiced?, which aims to reduce bias but also inadvertently furthers racist ideologies, using discredited racial terminology that cannot be repeated here.

The estimated racial scores for the MS Celeb face images used in the RFW dataset were computed using the Face++ API, which is owned by Megvii Inc, a company that has been repeatedly linked to the oppressive surveillance of Uighur Muslims in Xinjiang, China. According to posts from the ChinAI Newsletter and BuzzFeedNews, Megvii announced in 2017 at the China-Eurasia Security Expo in Ürümqi, Xinjiang, that it would be the official technical support unit of the "Public Security Video Laboratory" in Xinjiang, China. If they didn't already, it's highly likely that Megvii has a copy of everyone's biometric faceprint from the MS Celeb dataset, either from uploads to the Face++ API or through research projects explicitly referencing MS Celeb dataset usage, such as a 2018 paper called GridFace: Face Rectification via Learning Local Homography Transformations jointly published by 3 authors, all of whom worked for Megvii.

In 2017 Microsoft Research organized a face recognition competition at the International Conference on Computer Vision (ICCV), one of the top 2 computer vision conferences worldwide, where industry and academia used the MS Celeb dataset to compete for the highest performance scores. The 2017 winner was Beijing-based OrionStar Technology Co., Ltd.. In their press release, OrionStar boasted a 13% increase on the difficult set over last year's winner. The prior year's competitors included Beijing-based Faceall Technology Co., Ltd., a company providing face recognition for "smart city" applications.

Considering the multiple citations from commercial organizations (Canon, Hitachi, IBM, Megvii/Face++, Microsoft, Microsoft Asia, SenseTime, OrionStar, Faceall), military use (National University of Defense Technology in China), the proliferation of subset data (Racial Faces in the Wild), and the real-time visible proliferation via Academic Torrents it's fairly clear that Microsoft has lost control of their MS Celeb dataset and the biometric data of nearly 100,000 individuals.

To provide insight into where these 10 million faces images have traveled, over 100 research papers have been verified and geolocated to show who used the dataset and where they used it.

In April 2019, Microsoft responded to the Financial Times investigation by terminating their msceleb.org website and publicly stating the project was over. However, a recent research papers shows that the dataset is still being used by Microsoft Researchers.

Their project has also also re-released a smaller version of the dataset through their GitHub project page at https://github.com/facialactionpretrain/facs, compounding the initial problem of the unstoppable proliferation of the original MS-Celeb dataset. 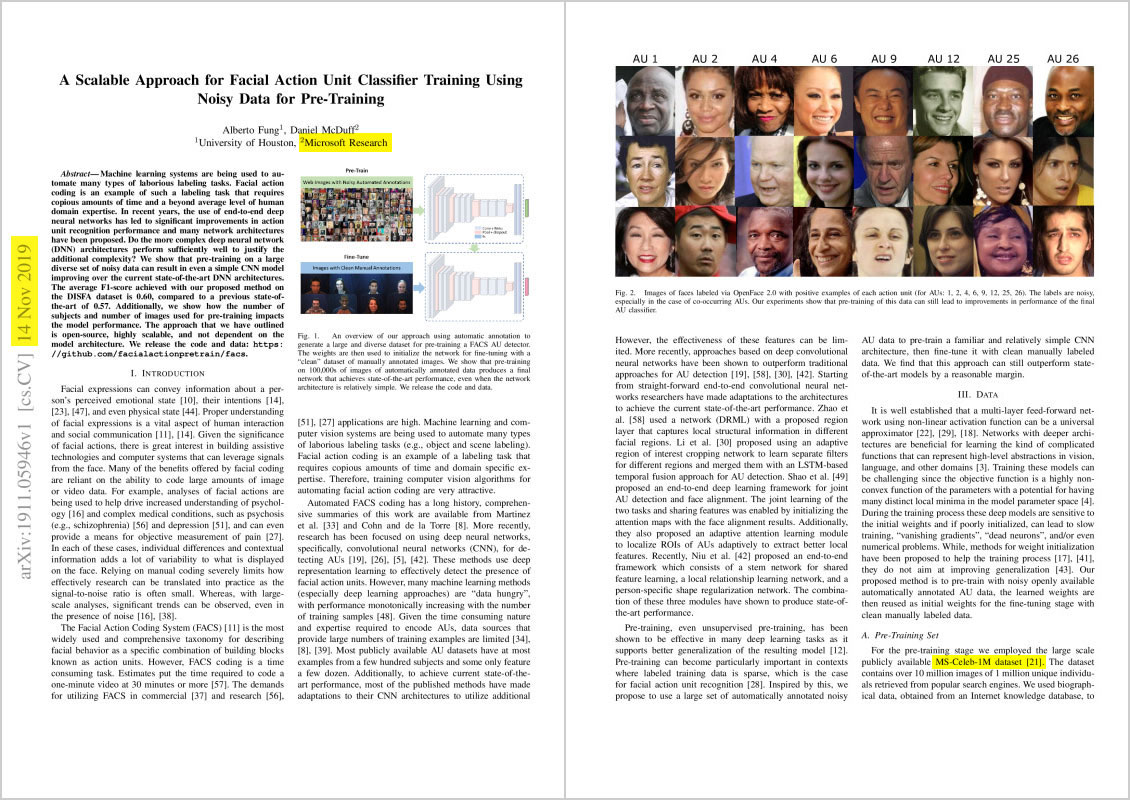 Updated to add a 2018 research poster and paper (Knot Magnify Loss for Face Recognition) from Huawei that used MS-CELEB-1M faces for training face recognition algorithms. This supports the growing amount of evidence that MS-CELEB-1M dataset has been used for widespread commercial activity. 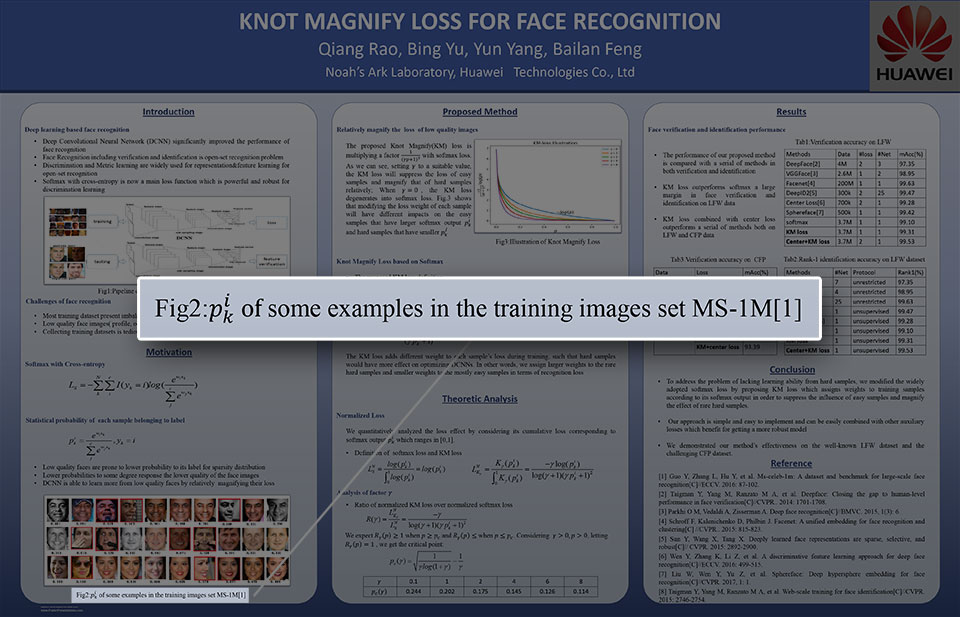 If you reference or use any data from MsCeleb cite the author's work: